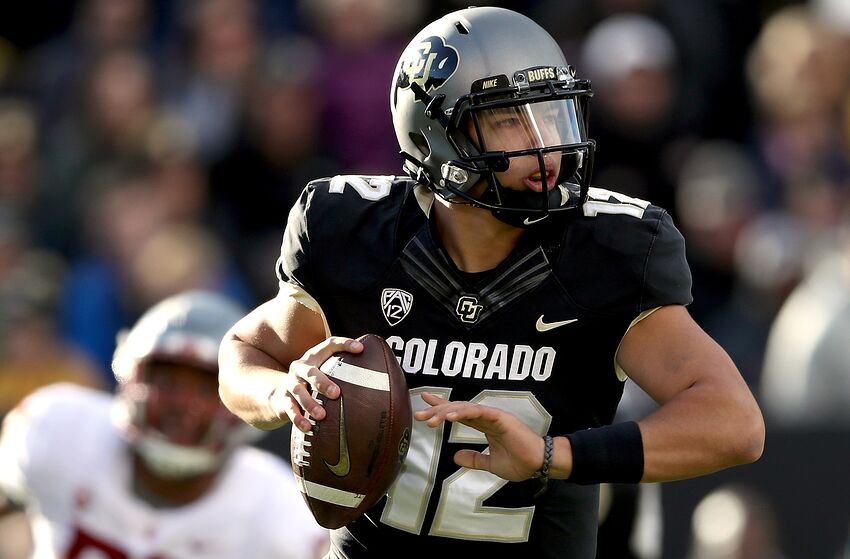 BOULDER, CO - NOVEMBER 10: Quarterback Steven Montez #12 of the Colorado Buffaloes is chased out of the pocket against the Washington State Cougars in the second quarter at Folsom Field on November 10, 2018 in Boulder, Colorado. (Photo by Matthew Stockman/Getty Images)

The fact remains this defense for the Buffaloes hasn’t exactly been lights out. Sure they’ve had flashes, causing some big turnovers in the Nebraska game, and coming up with a few key stops in the Air Force game a week ago. But, ask any player what week truly matters, or if they remember what they did a week ago? Answer is probably they’ve moved on and will be reminded when watching the highlight tape at the end of the year at a banquet with their teammates around them.

The defensive woes continue. Already the media is buzzing that the pac-12 has sloppy football, with Utah and Washington being clearly the best teams in the pac-12. But, defense has long been something missing from the conference. And most coaches and players will agree. They need to play better. Simple and plain, but can they is the question.

The offense that the Buffaloes are facing this weekend is not special, it won’t trick you. It’s a pro style offense that will spread you out at times and hammer you inside with a run, it will also spread you out and let its new yet highly functioning freshmen quarterback named Jayden Daniels. Oh did we mention he’s a true freshmen. Not the only one starting on that offense either. In key positions on the Offensive line for Arizona comes three true freshmen also playing. This offense although young has already bought into Herm Edwards system and is showing early signs of a top-tier program in the pac-12 in the coming years. Potentially challenging for a top spot maybe even this season in the south. Yeah, you hear about Utah and Washington and how they are likely on a collision come January. But, make no mistake this Sun Devil team has talent and with the young label comes a lot of confidence. They don’t respect anyone and it shows.

Colorado’s defensive front has to be sound this weekend. They were tested and frankly were dominated against Air force. From the point of attack and on the sidelines. Even a rare sight in the passing game. Just likely catching the Buffs asleep in the secondary. Sure a lot had to be attributed to Air Force they had a good game plan. The game plan is usually the same, get a lead then melt the clock. I’m not saying that they should push the panic button quite yet. I’m simply saying that the Buffs are coming off a loss in where a lower talented team with experience seemed to have their way for really three-quarters in Folsom field. The same cannot happen again in Tempe. The Buffs can’t afford to let Jayden do what he did against Michigan state. It’s a tough task, not only as a defense do you have to cover the pass, but you must have likely a linebacker or a nickel corner line up in spy coverage. Leaving you one less defender in the scheme. But, if it were easy… Everyone would do it.

The buffs are certainly up for the challenge. They likely are also frustrated with going into overtime against a team to be fair they looked to take very lightly. Nearly coming out with a victory in overtime, but near miss’ don’t count in the standings. A loss is a loss, and the Buffs have to quickly move on to the next week.

What I’m looking for throughout the game is how can Nate Landman perform against such a quarterback. He had a solid game against a Quarterback similar to Jayden in Nebraska. If he can contain and keep everything in front of him. With being physical and actually maintaining that strike first and relentless mentality that Mel Tucker has praised him so well. I think this can be a win for Colorado.

Buffs 28 Sun Devils 24. Is my prediction for the weekends game.